Have you ever wondered about the big bulge in sea level trend to the north of Australia and east of Indonesia. 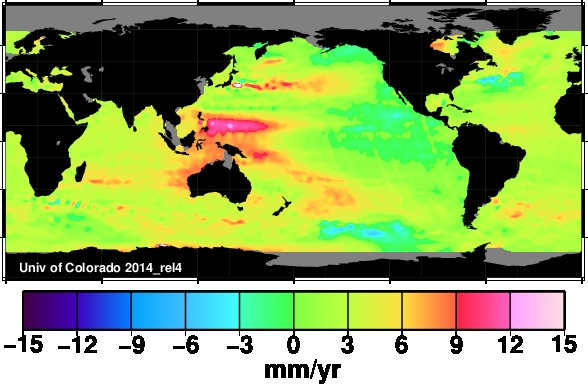 Well … it may be that the big bulge is just newly discovered giant vortices bumping into Indonesia.

“Enormous vortices of water, measuring 60 miles across, spin their way across the sea at a deliberate pace—3 miles per day. Oceanographers have dubbed them mesoscale eddies for their middle size, larger than a wake formed by an aircraft carrier and smaller than a gyre. Each one is like an upside down mountain of water, held together by its own rotation and extending about 3,000 feet beneath the surface. In the video above, eddies show up as red and blue dots dancing around. (Red ones spin clockwise, blue ones counterclockwise.) Just how much water gets carried around by all these eddies? The total is staggering: more than 30 times the amount dumped by all the world’s rivers into the ocean, “