Clean air legislation really got going in the late 1970s.

“A paper published today in the Journal of Geophysical Research – Atmospheres finds that due to a decrease in cloud cover, solar radiation has significantly increased over the US from 1996 to 2011. The authors note the change in longwave (infrared) surface radiation “dwarfs the [alleged contribution] from the increase of CO2 during the analysis period.” According to the paper, the natural variability due to changes in sunshine has had 4.4 times greater effect on surface radiation than increased greenhouse gases since 1996″

Read the rest at The Hockey Schtick.

As I’ve said numerous times, clean air legislation has cleaned the air, meaning less sunshine is reflected back into space, and more sunshine reaches the ground and causes warming.

The Hockey Schtick has found another paper showing sunshine is way up in Spain. And more sunshine means warming.

3.9W/m^2 is more than the effect of a doubling of CO2 (which has not happened yet)

The abstract is here.

I have other blog posts on the subject here.

The Hockey Schtick points to a new paper that finds a large increase in sunshine over the last 26 years.

“According to the authors, “the average increase of [surface solar radiation] from 1982 to 2008 is estimated to be 0.87 W m−2 per decade,” which equates to 2.26 W m-2 over the 26 year period. By way of comparison, this forcing was 12.5 times greater than the surface forcing alleged by the IPCC from increased CO2 over the same period.

The abstract is here. The paper is here.

“since the late 1980’s Rs has brightened over Europe due to decreases in aerosols but dimmed over China due to their increases. We found that variation of cloud cover determines Rs at a monthly scale but that aerosols determine the variability of Rs at a decadal time scale, in particular, over Europe and China.”

The warming since 1980 was caused by clean air legislation in the the US, UK and Europe.

I have posted several articles on this theme here , here and here.

I see Martin Wild is still writing papers proving that Surface Solar Radiation (I tend to call it Bright Sunshine)  is higher than in the past. (Thanks HockeySchtick)

Decadal variations in estimated surface solar radiation over Switzerland since the late 19th century – A. Sanchez-Lorenzo and M. Wild

Does this graph of Sunshine changes look like the temperature changes graphs? 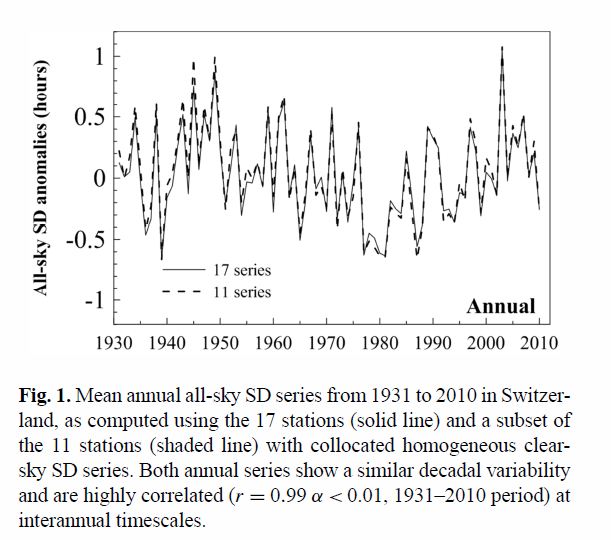 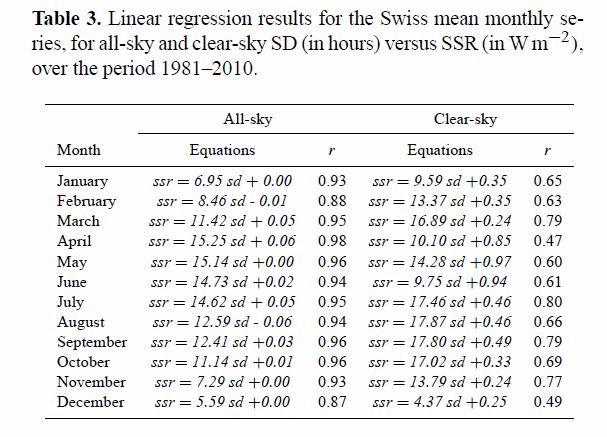