The NOAA said it was 44th coldest March in the USA .

Here is a sample 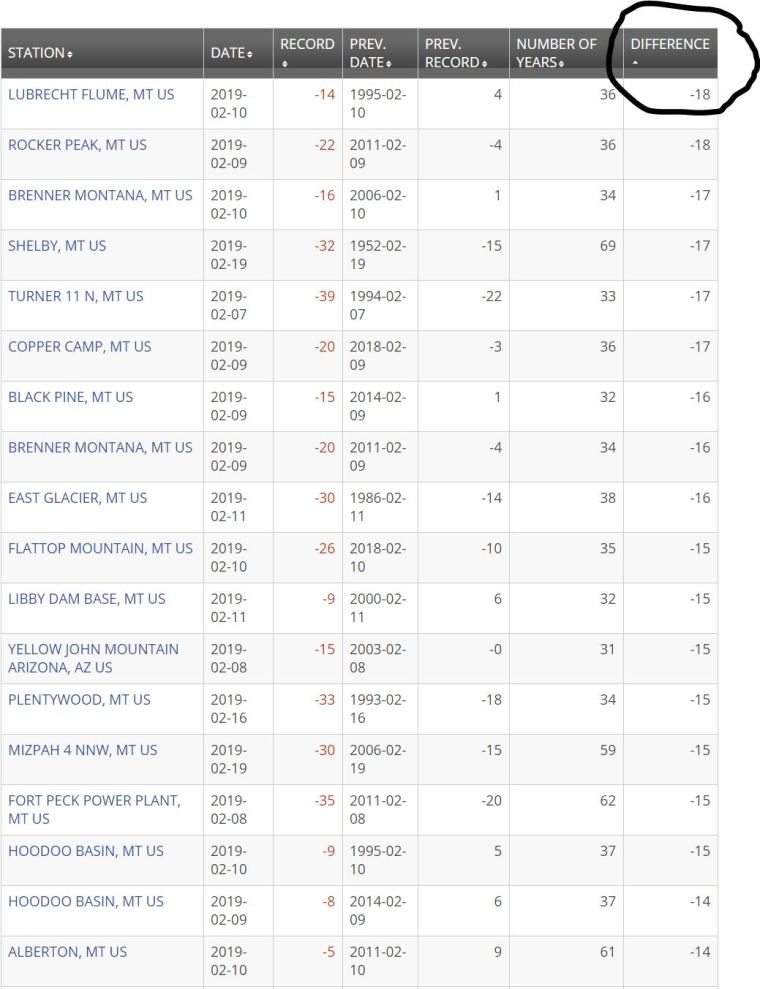 Cold waves in Eastern USA are down according to Dr Roy Spencer.

As can be seen in the plot below, there is no evidence in the data supporting the claim that decreasing Arctic sea ice in recent decades is causing more frequent displacement of cold winter air masses into the eastern U.S., at least through the winter of 2017-18:

The trend is markedly downward in the most recent 40 years (since 1979) which is the earliest we have reliable measurements of Arctic sea ice from satellite microwave radiometers (my specialty).

Now, I suppose that Arctic sea ice decline could have some influence. But weather is immensely complex. Cause and effect is often difficult to ascertain.

At a minimum we should demand good observational support for any specific claim. In this case I would say that the connection between Eastern U.S. cold waves and Arctic sea ice is speculative, at best.

Bjorn Lomborg has been trying to quell the hysteria about forest fires in the USA.

Some people have pointed out that the National Interagency Fire Center writes that “Prior to 1983, sources of these figures are not known, or cannot be confirmed, and were not derived from the current situation reporting process. As a result the figures prior to 1983 should not be compared to later data.”

This is convenient, since the NIFC for the longest time didn’t even want to acknowledge that there were data before 1960 (https://web.archive.org/web/20171206160413/https://www.nifc.gov/fireInfo/fireInfo_stats_totalFires.html). I’ve consistently pointed out that we had early data and where the data starting in 1926 comes from; it is the Wildfire Statistics from USDA, summarized in the official Historical Statistics of the United States – Colonial Times to 1970, p537: http://bit.ly/2hGp7XF.

So, we all know, very well, where this data is from.

Interestingly, what the NIFC forgets to tell us is that the earlier data was based on reporting from *much* less land – about 200m ha of 700m ha burnable land (http://www.publish.csiro.au/WF/WF14190). So, if anything, it is reasonable to argue that the early estimates should multiplied by 3.5 (divided by 2/7th), which indeed is what this article did (https://esajournals.onlinelibrary.wiley.com/doi/abs/10.1890/07-1183.1): “Littel et al. (2009) recognised the reporting bias and, as part of their analyses of fire–climate relationships in the western US, multiplied the USFS-reported WFAB estimates ‘by the ratio of the total area protected in 2003 to the area protected in a given year’.”

There are other, legitimate concerns, such as the inclusion of intentional burning in the early years, which may have added millions of acres to the numbers in the early part of the century (4-10% too much). But still, this does not in any way jeopardize the general trend of the data. This is of course why this data has been used by many academic publications, including Houghton, R. A. (03.2000). “Changes in terrestrial carbon storage in the United States. 2: The role of fire and fire management”. Global ecology and biogeography (1466-822X), 9 (2), p. 145.

If anything, the graph that I’m showing is likely *underestimating* the amount of burning in the early part of last century.

One way to see this is comparing the graph to the US estimate from forest fires in the global carbon budget from “Fire history and the global carbon budget” (https://onlinelibrary.wiley.com/doi/10.1111/j.1365-2486.2005.00920.x). They estimate the burnt area in Eastern and Western US (here added together) in decades from 1900-2000. It is very clear that not only is the graph broadly right, but early fire, from where we have no or very spotty data, is likely to have been even greater, compared to the present.

The USA is doing something about climate change. Other countries just talk.

Nineteen nations “believe” in climate change. How are they backing up their statement of faith?

China was praised for signing on to the Paris Climate Agreement and in Argentina reaffirmed its commitment to controlling greenhouse gas emissions. Last year, however, China increased those emissions by 1.7 percent.

India, the fourth largest source for CO2, saw their emissions grow by 4.6 percent in 2017. Luckily for them, they too were praised for signing that “nonbinding communiqué.”

Overall, the European Union raised their CO2 output by 1.5 percent.

France, home of the Paris Agreement, is leading the diplomatic effort to save the planet. They increased their greenhouse gas emissions by 3.6 percent.

If the nations paying lip service to climate change aren’t meeting their goals, imagine how poorly the oil-drilling, coal-mining Americans must be doing. President Donald Trump was pilloried for withdrawing from the Paris Agreement and for being only G20 leader who refused to sign the climate change statement in Argentina.

From 2016 to 2017, U.S. greenhouse gas emissions decreased by 2.7 percent. Emissions from large power plants declined 4.5 percent since 2016, and nearly 20 percent since 2011. All without signing a piece of paper in Paris or Buenos Aires.

A graph from Roger Peilke Jr