I feel sad for British Columbia (my home province). When I was growing up getting a job on megaproject was great thing to do.

Now British Columbians are relying on a superheated real estate market for ‘wealth’ as energy projects are getting cancelled.

First Nation are losing out too.

Those groups have signed benefits agreements involving cash, jobs and business prospects with projects such as Pacific NorthWest LNG, Trans Mountain’s pipeline expansion, Eagle Spirit Energy Holdings Ltd.’s upgraded oil pipeline, as well as others that have been spiked or delayed by various governments.”

In Europe: “diesel has been favored by public policy because it produces less carbon emissions than petrol, and is therefore better in the fight against climate change. But diesel produces far more air pollution – up to 15 times more than petrol (or unleaded gasoline).”

“The French and British capitals are grappling with dangerous levels of air pollution this week – conditions in winter help smog stick around. The mayor of Paris wants to ban diesel cars to stem it. Will London follow?”

Remember, this is all going on at the same time the UK is building diesel farms to save their electricity grid from the stupid decision to rely on wind.

Poor Ontario. An energy policy created by green activists is a grotesquely expensive mess that consumers will be paying for …. for the rest of their lives.

Read and weep here. Unfortunately Canada now has a pretty Prime Minister who will drag us down the same road and commit economic suicide. 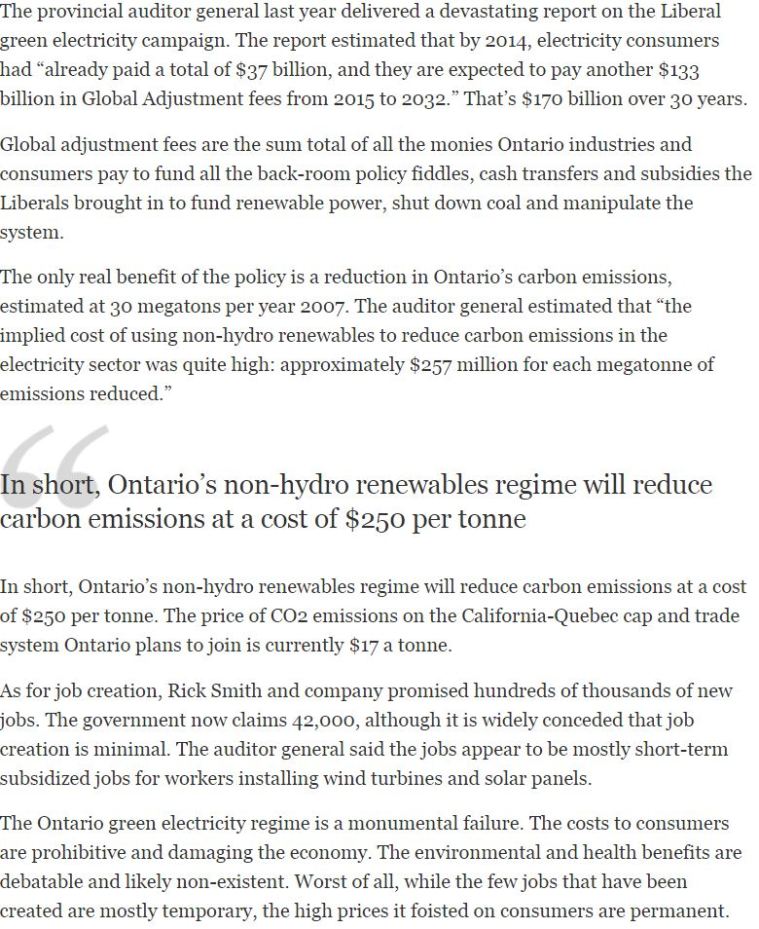 “A company that operates at least 13 wind-energy facilities across three states is suing in federal court to block the US government from releasing information to the Associated Press about how many birds are found dead at its facilities.

Pacificorp of Portland, Oregon, is seeking an injunction in US district court in Utah to prevent the Interior Department from releasing information it considers confidential. The Obama administration has said it planned to turn over the material to the Associated Press, which sought it from the Interior Department in March 2013 under the US Freedom of Information Act. The government concluded that the industry’s concerns were “insufficiently convincing” to keep the files secret.

The information the AP sought was part of its larger investigation into bird and eagle deaths at windfarms and the administration’s reluctance to prosecute the cases as it advocated the pollution-free energy source. The AP asked the US Fish and Wildlife Service for data collected under federal permits given to companies to collect the carcasses of protected bird species, including eagles and migratory birds, found dead at their facilities.

By 2020, continued use of biodiesel derived from vegetable oil will increase total EU transport emissions by almost four per cent compared with using its fossil fuel alternative, according to analysis by Transport & Environment, a green group.

That is roughly equivalent to putting an extra 12 million cars to the road, it says.

Countries across Europe have blended small percentages of biofuels into petrol and diesel in recent years in an attempt to cut emissions and to hit the EU’s renewable energy directive (RED), which requires 10 per cent of transport energy to come from renewable sources by 2020.

But Transport & Environment says the EU’s own studies show that producing biodiesel from food crops – in particular soy and palm oil – is significantly worse for the environment than producing regular diesel.

“Australian academics say they are being forced to exaggerate or embellish the potential impacts of their research when trying to secure limited funding for projects.

But the head of the Australian Research Council has rejected the claim scientists have to lie to get a project funded, saying there is a difference between speculating and lying.

The revelations are included in a study of a relatively new system where academics forecast the impact of their research when applying for funding.

The study is based on 50 interviews of unnamed academics in Australia and Britain.

The 25 Australian academics said it was difficult to give an accurate answer when a grant application asked them to predict the impact of their project.

“It’s virtually impossible to write one of these grants and be fully frank and honest in what it is you’re writing about,” one unnamed academic said.

“I don’t know what you’re supposed to say. Something like, ‘I’m Columbus, I’m going to discover the West Indies’,” a second unnamed academic said.

The proposals are reviewed by experts who do have a really good and sharp sense of what’s plausible and what’s implausible, and what’s fictitious and what’s not.

“It’s really virtually impossible to write an Australian Research Council grant without lying, and this is the kind of issue they should be looking at,” a third unnamed academic said.”

Once Upon A Time They Blamed Termites. Maybe they were right.

For several years scientists have been warning that carbon dioxide added to the atmosphere by increased burning of fuel is likely to alter world climates, like a greenhouse, by inhibiting the escape of heat into outer space.

Now researchers report that termites, digesting vegetable matter on a global basis, produce more than twice as much carbon dioxide as all the world’s smokestacks.

Termite gas production has become particularly high, the researchers say, because widespread clearing of land has offered them abundant food in the debris of felled forests. By digesting this debris, they are adding not only carbon dioxide but also methane to the atmosphere. Other researchers have found that methane in the atmosphere is increasing 2 percent a year.

As pointed out Wednesday by one of the researchers, James P. Greenberg of the National Center for Atmospheric Research in Boulder, Colo., termites are far more abundant than most people realize. He estimated that there were three quarters of a ton of termites for every person on earth.

Another author of the report, Patrick R. Zimmerman of the atmospheric center in Boulder, said that plant respiration and decay added 10 to 15 times as much carbon dioxide to the air as termites. While the contribution of fuel burning is even less, it is superimposed on what, until recently, had been a balanced cycle of gas production and absorption by plants, the seas and other reservoirs.

The findings concerning carbon dioxide and methane production by termites do not offer much comfort regarding the long-term trend in atmospheric gases. The output from insects does not appear likely to increase greatly, while combustion of fuel is rising steadily as developing nations industrialize.

Other authors of the Science article were Dr. Paul J. Crutzen, director of the Max Planck Institute for Atmospheric Chemistry in Mainz, West Germany, and S.O. Wandiga of the University of Nairobi in Kenya.

The steady rise in methane was reported by Dr. Reinhold A. Rasmussen and Dr. M. Aslam Khan Khalil of the Oregon Graduate Center last year. They said human activity was also releasing increasing amounts of other gases that threatened climate, including carbon dioxide and fluorocarbons, which are used in refrigeration.

The possible significance of increased methane in the atmosphere touched off a debate in 1971 on whether supersonic transports might alter the stratosphere. Dr. S. Fred Singer, then at the University of Maryland, suggested that other human activities, including intensive cattle-fattening, were more important. He cited an estimate that bovine flatulence added 85 million tons of methane to the atmosphere each year. The new estimate for termites is 150 tons.”