I came across blog posts mentioning two papers about UHI.

Essentially the ground temperature is record is so contaminated by UHI that Ocean Heat Content should be the only metric … but if you want to use thermometers you should never use nighttime (Tmin) temps and therefore Tavg should not be used.

Only Tmax should be used.

A field experiment was performed in Oak Ridge, TN, with four instrumented towers placed over grass at increasing distances (4, 30, 50, 124, and 300 m) from a built-up area. Stations were aligned in such a way to simulate the impact of small-scale encroachment on temperature observations. As expected, temperature observations were warmest for the site closest to the built environment with an average temperature difference of 0.31 and 0.24 °C for aspirated and unaspirated sensors respectively. Mean aspirated temperature differences were greater during the evening (0.47 °C) than day (0.16 °C). This was particularly true for evenings following greater daytime solar insolation (20+ MJDay−1) with surface winds from the direction of the built environment where mean differences exceeded 0.80 °C. The impact of the built environment on air temperature diminished with distance with a warm bias only detectable out to tower-B’ located 50 meters away.

The experimental findings were comparable to a known case of urban encroachment at a U. S. Climate Reference Network station in Kingston, RI. The experimental and operational results both lead to reductions in the diurnal temperature range of ~0.39 °C for fan aspirated sensors. Interestingly, the unaspirated sensor had a larger reduction in DTR of 0.48 °C. These results suggest that small-scale urban encroachment within 50 meters of a station can have important impacts on daily temperature extrema (maximum and minimum) with the magnitude of these differences dependent upon prevailing environmental conditions and sensing technology.

I think the title of the article is obvious and isn’t new.

But what interested me was the UHI effect and causes and the admission it it huge.

Cities are generally a few degrees warmer than the countryside, due to the urban heat island effect. This effect is caused partly by a lack of moisture and vegetation in cities compared with rural landscapes, and because urban building materials store up heat. During heatwaves, daytime temperatures can get dangerously high in cities, leading to serious health effects and increasing mortality risk.

The idea of ‘cool’ roofs is to make roof surfaces more reflective to sunlight (for example by painting roofs a lighter colour) thereby reducing local temperatures.

Scientists used a regional weather model to look at how temperatures changed across the study city of Birmingham and the West Midlands, depending on the extent of cool roof deployment. They looked at the hot summers of 2003 and 2006, and found that the intensity of the urban heat island (the urban-rural temperature difference) reached up to 9oC for Birmingham city.

Previous work has shown that the extra heat associated with the urban heat island is responsible for around 40-50% of heat related mortality in the West Midlands during heatwaves.

This latest study, published in Environment International, suggests that implementing cool roofs across the city can reduce peak daytime local temperatures by up to 3oC during a heatwave. This reduction in temperature could potentially offset around 25% of the heat-related mortality associated with the urban heat island during a heatwave.

The urban heat island effect is most pronounced at night time, because urban materials slowly release their stored heat overnight, however, the biggest benefits of cool roofs were seen to be during the hottest part of the day where sunlight was reflected away. The type of building made a difference too: modifying only half of all the industrial and commercial buildings had the same impact on lowering temperatures as modifying all the high-intensity residential buildings.

The observed increase in T min can be attributed to an increased intensity of the UHI during the hours after sunset and into the night. Many studies have previously shown that UHII is maximised during the night (Arifwidodo and Tanaka, 2015; Montávez et al., 2000; Ripley et al., 1996). The intensity is maximised during these hours, as heat absorbed by urban structures will be re‐radiated back into the atmosphere at a slower rate, due to smaller sky views, than natural structures. Further, the increase in impervious surface in an urban area causes a reduction of the latent heat flux and a rise in the sensible heat flux (Zhou et al.,2014). This leads to a difference between the rates at which the urban and natural area will cool during the night, with urban areas sustaining a higher temperature into the night. With minimum temperatures often occurring at night, the slowed rate of cooling in urban areas results in an increase of the observed minimum temperature.

However when the monitoring station was moved out of the urban area, the last 20 years of record shows that the nighttime temperature is 0.6 deg C lower than the previous 98 year average. This indicates that the urban area of Deniliquin may be warmer than its surrounding rural regions.

To test this, measurements were taken of the air temperature, wind speed and direction at seven locations along a transect on either side and through the center of the town. During February 1995, measurements in Deniliquin showed that on clear and calm nights, the town centre can be up to 4.2 deg C warmer than beyond the airport.” 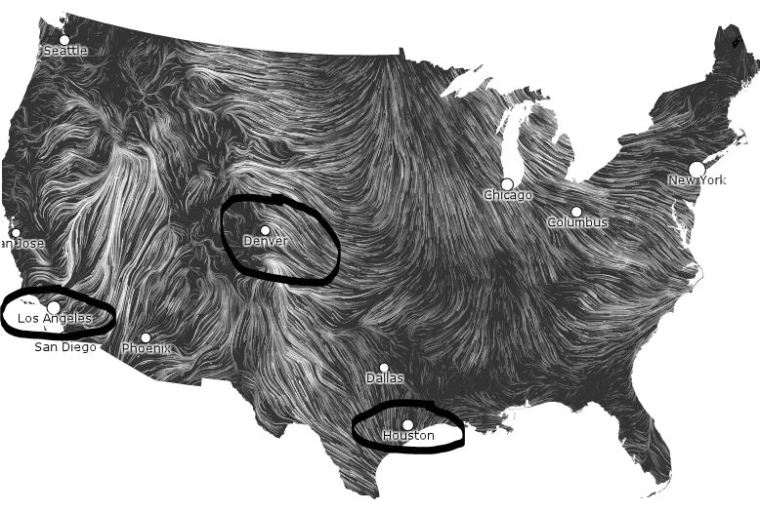