Looking for clues about the leak

Astronauts were forced to use knives and shears to carve a gaping hole into the side of the International Space Station to find clues to a mysterious drilled hole that leaked valuable cabin pressure four months ago.

Two Russian cosmonauts – Sergei Prokopyev and Oleg Kononenko – were forced to use an armoury of tools to uncover the source of the leak in a gruelling seven hour, 45 minute spacewalk.

Dramatic images and footage show insulation and debris from the spacecraft’s hull floating into space as they hacked into the side of the Soyuz capsule with daggers and garden shear-like devices.

Roscosmos, Russia’s space agency, said the aim was to discover whether the ‘small but dangerous’ hole was deliberately caused in an act of ‘sabotage’ or if it had been made in space.

The two-millimetre cavity on the Soyuz spaceship docked at the ISS caused an air leak detected in August, two months after the craft’s last voyage.

Until Tuesday, astronauts had only been able to examine the hole from inside the spacecraft. 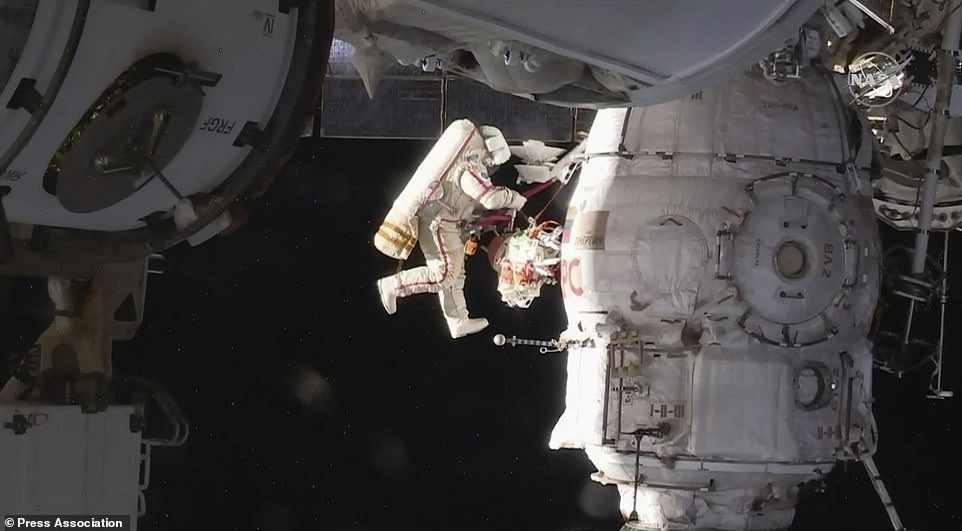 Russians Sergei Prokopyev and Oleg Kononenko spotted the tiny hole in the external hull of the Soyuz capsule, more than five hours into their gruelling spacewalk.

What made it especially hard is that the Soyuz spacecraft, unlike the ISS, was not designed to be repaired in spacewalks and has no outside railings for astronauts to hold onto.

‘There’s nothing, that’s the problem,’ Mr Kononenko said ahead of the outing.

“Russia should follow the lead of Gazprom and have more cars running on natural gas instead of traditional gasoline, according to President Vladimir Putin. It is cheaper and more eco-friendly, he said.

“Gas fuel is, of course, more environmentally friendly. And we have great competitive advantages in this because we have enough of this fuel. More oil and petroleum products can be sold on the foreign market, as it is more profitable than gas sales,” Putin said on Thursday, speaking at a meeting dedicated to the development of Russia’s regions.

Putin also pointed at Gazprom as an example of how gas fuel saves money. When the company switched to gas fuel, many of its drivers retired because they no longer had an opportunity to steal gasoline.

The president was referring to drivers working for state companies who commonly fill up using corporate credit cards, then siphoned and resold the petrol to other drivers.

“And what about the army? What is happening in the Ministry of Defense and in other departments? I think comments are needless,” said the Russian president, apparently hinting at the same practice.

“Natural gas fuel will have a huge positive economic effect and will create competitive advantages for the whole economy. Therefore, it is necessary to continue, of course, to support its development, both at the governmental level and at the regional,” Putin added.”