“The difference between average estimated and average non-estimated, doesn’t reflect estimation. It just reflects changes in the kind of stations that were being estimated.

For some reason, they were more likely to be warmer. I don’t know why, but they were. It’s just the wrong way to do it.”

I’m not sure I believe in coincidences.

Neither of them added trend lines.

I believe both used all the data (infilled and non-infilled). (As of my posting this they had not confirmed). I disagree with that. Infilled data should not be used in the baseline.

From 1895 to 2013 the infilled trend is consistently .02C/decade to .03C/decade higher than the non-infilled trend.

The red dots are higher on the 1980 and later side of the graph while they are lower on the pre-1960 part of the graph.

Cooling the past, warming the present.

Zeke has an post over at Judith Curry’s blog where he makes a claim that “infill has no effect on CONUS-wide trends” (among other claims).

Infilling does change the trend. For example, Estimating changed the trend in Dec from .06C per decade to .07C per decade because the Estimated data had a trend of .15C/decade.

Yesterday I did a post looking at every station and finding out which year had the hottest July. Today I am showing you what effect the adjustments have.

I am using USHCN Final Tmax monthly data and comparing it to the raw data . From the file v2.5.0.20140627. (This is not necessarily all the data NOAA uses)

The format is a little different, but it is designed to allow easy comparison. Red is the raw data. Green is Final and muddy green is where raw and final overlap.

As you can see, the number of years near the present have a lot green. Which means the adjustments created more record hot years.

The 1910s to 1980s have red at the top which indicates raw data. Translation: More record July’s occurred in the past using raw data.

For the Coldest July data, the results are the opposite. Adjusting creates more colder July’s in the past and takes away cold July’s from the present. 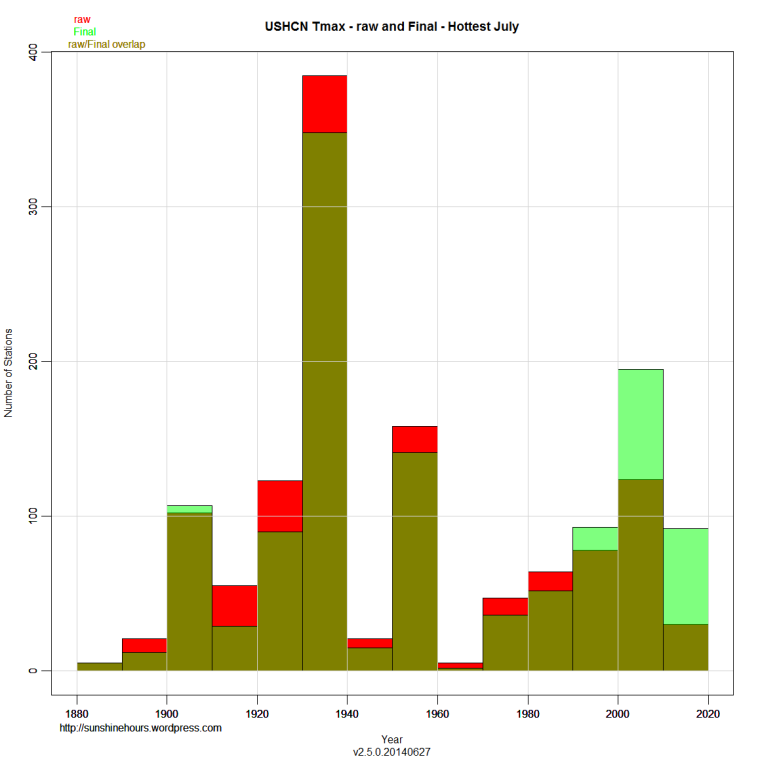 The other day I noted that NOAA had July 1936 back on top. Now don’t take this post as an endorsement of the adjustments and infilling, but I thought I would check which years did stations set their hottest July and coldest July.

I don’t think the histogram of the hottest July will actually be a surprise. 216 stations had their hottest July in 1936.

I just picked the top 15 stations with the coldest July in 1992 and the hottest July in 1936. There are 92. The temperatures are in Celsius.

Here are a sample of 15 that have neither.

UPDATE:  I am adding the following means:

I’ve been doing posts about USCHN and Estimated data. I wanted to visualize.

Form the most part, in July 1936 the red data (Final) is colder than the raw temperatures (black) and in 2012 it is the other way around.

The data is in F (originally in C so there may be very slight conversion issues).

Black temperatures are raw, blue are TOBS and red are Final adjusted. Stations with just a red have no raw data. The data is just ‘E’stimated. 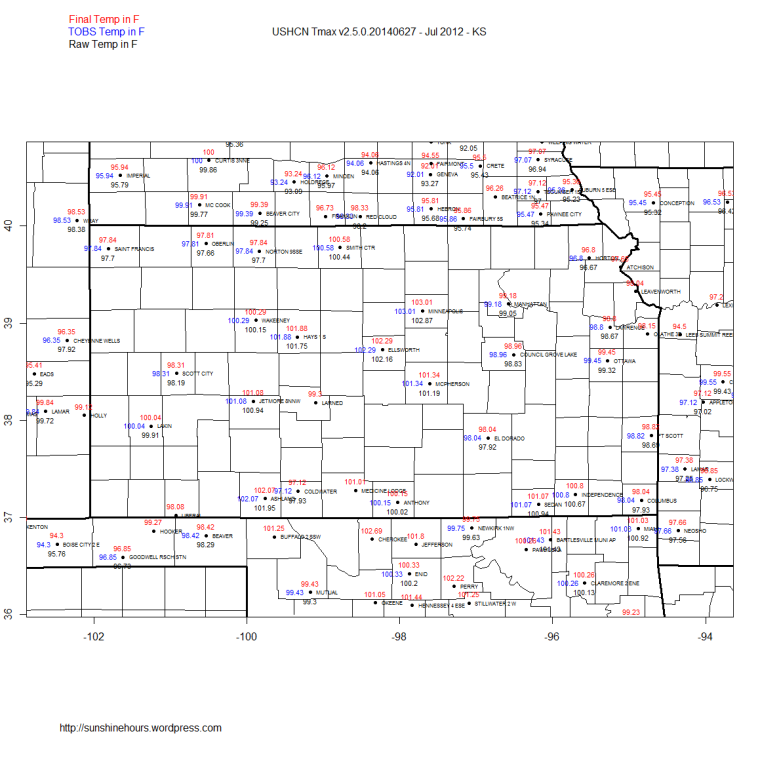 I’ve been posting on USHCN and the effect of “estimating” or “Infilling” on  the Final data.

Earlier today I showed that Estimating/Infilling made the 1980-2014 trend steeper upwards.

Now I will show the opposite: When the trend is down, infilling makes the trend steeper downwards.

I repeat … this is the Final data after all the other adjustments. About 15% of the data is Estimated from neighboring stations.

I will post all the monthly graphs … but just discuss the first – January.

Not a big change. But it is always there.  But the red line is almost always well above the others. Sometimes by 2C.

I’ve been posting on USHCN and the effect of “estimating” or “Infilling” on  the Final data. I did Arizona earlier.

I repeat … this is the Final data after all the other adjustments. About 15% of the data is Estimated from neighboring stations.

I will post all the monthly graphs … but just discuss the first – January.