I’ve been trying to figure out why so many weather stations are cooling since 1900 in the US. You can check out the map of their locations here.

I’ve been using the Berkley Earth dataset, quality controlled. (not that I trust it for reasons demonstrated here) .

Then I came across a list of US Counties with 2010 population and Latitude and Longitude here. And I found a list of Population By County with data for 1900,1910,1920 up to 1990 here. So I wrote a small [R] script to import the files, massage them a tiny bit so I could merge them by FIPS code.

And then I mapped those counties with the R package RGoogleMaps. In the map below I am only showing the counties that have been shrinking since 1900.

Doesn’t it look a like the map of cooling stations? Admittedly there is no an exact match because the Latitude Longitude is for the center (by population I think) of the counties and there is no guarantee that just because a county is losing population the area right around the station is losing population. But it might be a good indicator, or maybe UHI at the county level is important. 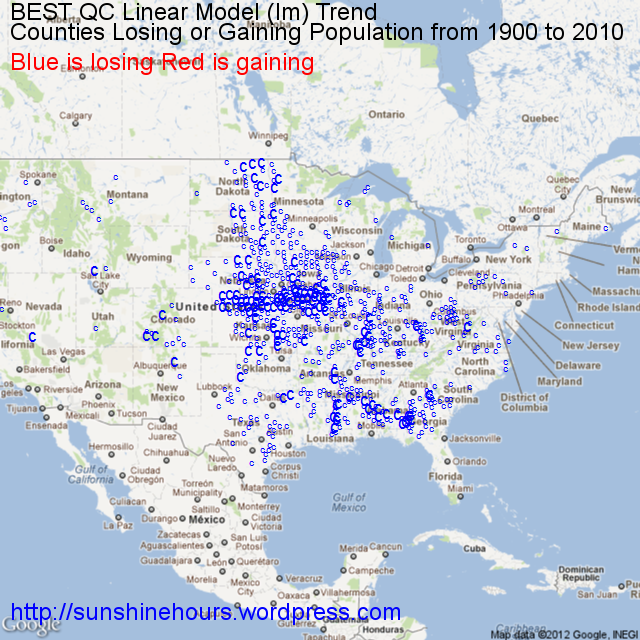 But I think I am zeroing in on the reason there are so many cooling stations in the mid to eastern USA. Depopulation. Deindustrialization. Negative UHI.

And if a shrinking population can cause stations to cool despite increasing CO2, could not the opposite be true? Could not the warming be caused exclusively by population growth?

Finally, that map is just the counties shrinking since 1990.

One thought on “Depopulation and cooling at the county level”