I referenced this  paper a few days ago. This blog post extrapolates the numbers to Canada.

After collecting reams of data, and performing careful calculations, the researchers conclude that US heating bills declined noticeably between 2005 and 2010 “due to the boom in shale production of natural gas.”

That price decline, they write, “caused a 1.6% decrease in the winter mortality rate for households using natural gas for heating.”

Only 58% of American households heat with natural gas, so the drop in the death rate for the US population as a whole over a full calendar year works out to about half a percentage point. The bottom line: lower energy prices saved 11,000 lives annually.

Which brings us to the carbon tax recently imposed on all sources of home heating here in more northerly Canada. Enbridge, the company which supplies natural gas to Ontario homes, says it needs to raise the price it charges households by 11% just to pay for this carbon tax.

Extrapolating from those US numbers, 1,100 Canadians will die unnecessarily next winter. And the winter after that. And the one after that. As the size of the carbon tax increases, the number of annual victims may well rise in tandem.

Deaths attributable to cold weather in Southern New England are over 2 orders of magnitude larger than deaths attributable to warm weather. Further, projections of future temperature increase due to global warming will bring a net savings in human lives! https://t.co/INcec9V9TB pic.twitter.com/BtuNskuKv4

The good news about the cold:

DULUTH, MN — When it’s so cold your face hurts, and it’s hard to talk, it’s easy to forget there are actually some positives that come with these extreme cold temps.

We’re all-too-familiar with the Emerald Ash Borer in our region.

We’re also familiar with the bitter January cold, which right now, may be killing off the larvae of the invasive species.

“When temperatures get to about 20 below zero Fahrenheit, we see about 50% of the Emerald Ash Borer Larvae begin to die,” said Rob Venette, director of the Minnesota Invasive Terrestrial Plants and Pests Center with the University of Minnesota.

Researchers at the U of M have been studying the effects cold weather may have on the Emerald Ash Borer for years.

Experts say at 30 below and colder, as much as 90% of the ash borer larva could be dying off.

“Once ice begins to form in their bodies, that kills the insect,” said Venette.

The insects are not impacted by wind-chill. So, the actual temperature is what must be considered, which can oftentimes be colder than where insects burrow for the winter.

“Although we may be experiencing minus 40, it may only be maybe minus 35 under the bark of a tree. So, that helps the chances of an insect to survive,” said Venette.

Venette added, even though they are expecting large amounts of Emerald Ash Borers to die off as a result of this cold snap, that won’t impact how they survey the population in the spring.

Dr. Robert Sterner, director of the Large Lakes Observatory, says the cold could be putting a dent in the aquatic invasive species in Lake Superior, as well.

“The invasive species are coming from places in the world that typically aren’t as cold as we experience in a cold winter here,” he said.

Meaning the cold could be enough of a shock to kill at least a portion of them.

“We believe there is a relationship between warming conditions and the success of invasive species. So, weather like this is only good news as far as the native species go,” said Dr. Sterner.

And when lakes are covered in ice, water evaporation dramatically decreases, and typically, the water temperature is cooler in the summer.

Increased water volume can be good for the shipping industry, and ecological systems within the lake. However, it is not very popular amongst shoreline homeowners as it can contribute to shoreline erosion.

More ice can also mean ice-out occurs later than normal, meaning colder lake water in the summer, which officials say could reduce the chances of algae blooms in lakes, as well.

That is contingent on the thaw and warming cycle in the spring and early summer.

If we could only lower CO2 enough to cool down our overheated planet things would be so much better. 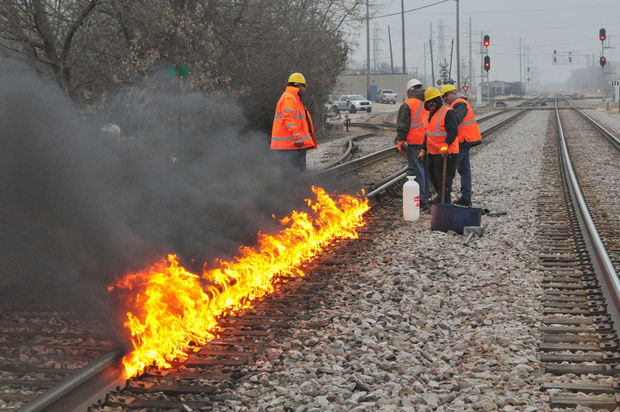 “… out-of-hospital cardiac arrest (OHCA) is “an on-going public health issue with a high case fatality rate and associated with both patient and environmental factors,” including temperature. And recognizing the concern that exists over the potential impacts of climate change on human health, the two scientists set out to investigate the population attributable risk of OHCA in Japan due to temperature, and the relative contributions of low and high temperatures on that risk, for the period 2005-2014.

To accomplish their objective, Onozuka and Hagihara obtained OHCA data from the Japanese Fire and Disaster Management Agency of the Ministry of Internal Affairs and Communications, which data amounted to over 650,000 cases in the ten-year period from all across the 47 Japanese prefectures. Thereafter, using climate data acquired from the Japan Meteorological Agency, they conducted a series of statistical analyses to determine the temperature-related health risk of OHCA.

“New figures from the Office of National Statistics today show that the number of excess winter deaths exceeded 50,000 the highest on record since the winter of 1975/76. Over 15,000 of these deaths will be relatable directly to a cold home. The vast majority will have multiple hospital and GP visits behind them. The figures also worryingly show a doubling in the number of male deaths under 65.

“Today’s excess winter death figures should be a huge shock to the system. The cost in human suffering and lost lives is a tragedy. The cost to the NHS is significant and largely avoidable.

Predictable, preventable and shameful. We seem to have accepted excess winter deaths to be as much a part of winter as darker evenings.

On top of these preventable deaths we know that many millions more people will have suffered the preventable health impacts of living in a cold and damp home, as well as resorting to harmful coping strategies.

New evidence provided by frontline workers to NEA, has revealed the top 10 unsafe fuel poverty coping strategies being used to survive winter. The regular use of older, dangerous or un-serviced heating appliances is common place, despite being potentially fatal or leading to heightened risks for nearby neighbours as a result of carbon monoxide poisoning or in extreme situations, fires and explosions. The charity says many more people are going to bed early to keep warm and using candles to save on electricity. People struggling to heat their homes are also spending their days in heated spaces such as libraries, cafes or even A&E to avoid the cold.”

Some previous blog posts on the same subject.

Cold weather kills 20 times as many people as hot weather, according to an international study analyzing over 74 million deaths in 384 locations across 13 countries. The findings also reveal that deaths due to moderately hot or cold weather substantially exceed those resulting from extreme heat waves or cold spells.

Around 7.71% of all deaths were caused by non-optimal temperatures, with substantial differences between countries, ranging from around 3% in Thailand, Brazil, and Sweden to about 11% in China, Italy, and Japan. Cold was responsible for the majority of these deaths (7.29% of all deaths), while just 0.42% of all deaths were attributable to heat.

'Academics are baffled'. Let me help them:
It was very cold. The government has pushed up energy bills to pay for #renewables because scientists tell us it's going to be very warm. The sick & elderly die from cold-related illnesses in under-heated homes.https://t.co/ZDGVbE8Ioy

In a recent study a team of scientists led by Prof. Pierre Gosselin assessed 112,793 people aged 65 years and older who had been diagnosed with heart failure in Quebec between 2001 and 2011. Over an average of 635 days, the researchers measured the mean temperature, relative humidity, atmospheric pressure and air pollutants in the surrounding environment and studied the data to see if there was any relationship.

Their results: for each decrease of 1°C in the daily mean temperature of the previous 3 and 7 days, the risk of heart failure events is increased of about 0.7%. In other words, a drop of 10°C in the average temperature over 7 days, which is common in the province of Quebec because of seasonal variations, is associated with increased risk to be hospitalized or to die for the main cause of heart failure of about 7% in elderly diagnosed with this disease.