Sunshine in Germany was way higher than usual October 2018. 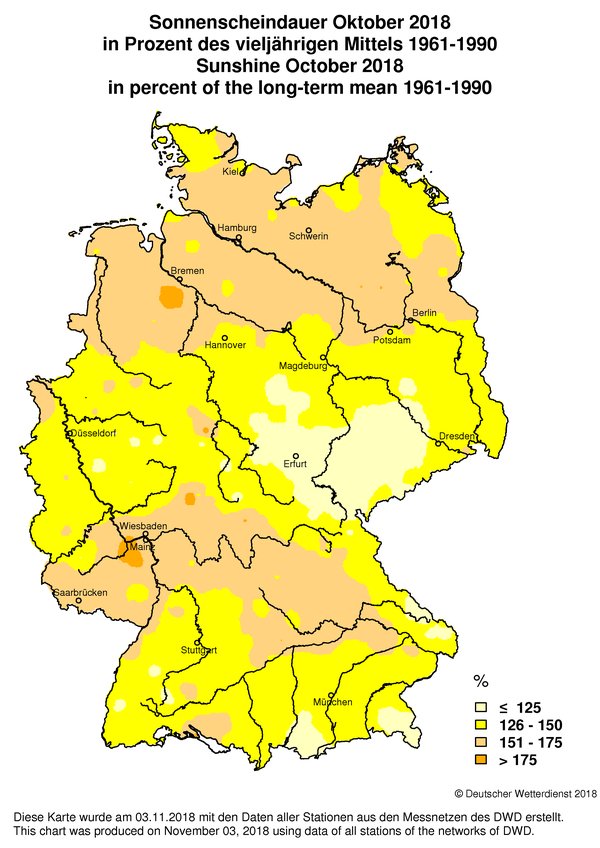 Lets say its March 26th 2018 8pm in Germany and there is about 59GW of demand to keep the country functioning and you are a greenie looking forward to a day when there is no more nuclear or CO2 producing power plants..

Remember the big noise a few weeks back about Germany being essentially powered by wind turbines.

Not so much noise now that wind is 5GW or less for about 6 days in a row.

Because of the boom of renewable energy, more and more wind turbines have to be switched off. The reason is power overloading. The network operators must turn down electricity generated from windmills when their power threatens to clog the network. Originally, this was intended only as an emergency measure. The operators of wind and solar parks, however, are being subsidised for electricity that is not produced.

For the grid operator Tennet alone, these costs added EUR 329 million in 2015 – two and a half times as much as in the previous year. The other network operators 50Hertz, Amprion and EnBW had a combined cost of 150 million euros, according to a survey of Wirtschaftswoche among the four network operators in Germany.

Germany is planning to rely on wind and solar. I shake my head in wonder when I see wind generation statistics like Week 15.

3 days in a row with less than 3GW. (The following chart is just wind electricity production)

Averages don’t keep the electricity on. They will need lots more brown coal when they shut down the nuclear power stations.

The whole week (just solar and wind). Yes, sometimes combined they generate a lot of electricity.

But on April 8th Germany went almost a 1.5 days where almost nothing was generated by wind.

1,000 more coal power plants for China. And then power exports all the way to Germany.

China’s proposed investments in long-distance, ultra-high voltage (UHV) power transmission lines will pave the way for power exports as far as Germany, the head of the national power grid said on Tuesday as he launched an initiative for cross-border power connections

Exporting power to central Asia and beyond falls into China’s “one belt, one road” ambitions to export industrial overcapacity and engineering expertise as it faces slowing growth at home. The plan would allow enormous hydropower dams, coal-fired power plants and wind farms in frontier regions such as Xinjiang to sell into higher-priced markets overseas. The “belt” refers to the land route from Asia to Europe, while the “road”, curiously, refers to the sea route via the Indian Ocean.

Talk of exporting power is a reversal for China, which as recently as 2004 suffered rolling blackouts across its manufacturing heartland. But huge investments in power in the decade since, and the construction of a number of dams, nuclear reactors and coal-fired plants due to begin operating in the next 10 years, mean the country faces a growing surplus.

Liu Zhenya, chairman of State Grid, told reporters that wind and thermal power produced in Xinjiang could reach Germany at half the current cost of electricity there. “There are so many resources, but no market. We need to find it externally.”

Word of the day:

In German, the term Dunkelflaute is used to describe the predicament. Dunkel means “dark”; solar is simply not available half the time, and solar power production is significant for only around six hours a day even when the sun is shining. Flaute is “doldrums” – when the wind is not blowing. So the “dark doldrums” are times when solar and wind power is not available in sufficient amounts.

This chart is just wind+solar for March in Germany. Red lines are periods less than 5GW.

There are still eight nuclear power plants on the German energy grid; once there were almost twenty. In six years the last eight will also have been shut down. No more controversies in parliament, no more public debates. It is easy to overlook the fact that a special commission is discussing just how much it will cost to dismantle what is left of Germany’s nuclear energy program, and who will have to pay for it. The energy companies? Or will taxpayers get stuck with the bill in the end? It is a debate for insiders.

Just remember March 7 2016 (not that unusual) when wind dropped to essentially zero.