A sad story about a town trying to feel good about itself and squandering 12 million + and wrecking peoples health.

“We had the best of intentions … ” and didn’t really care about cost, neighbors, rules.

“FALMOUTH — For nearly a decade, the giant blades have loomed over this seaside town, stirring hope and fear in the salty air.

To proponents, the twin wind turbines proved that residents could act on their ideals, producing their own clean energy and relying less on fossil fuels. To critics, they were mechanical monstrosities, blinking eyesores whirring at such a frequency that some neighbors said they became ill.

Nine years after the first was built beside Falmouth’s waste treatment plant, both turbines now stand idle, no longer producing a kilowatt of electricity, totems of good intentions gone awry.” 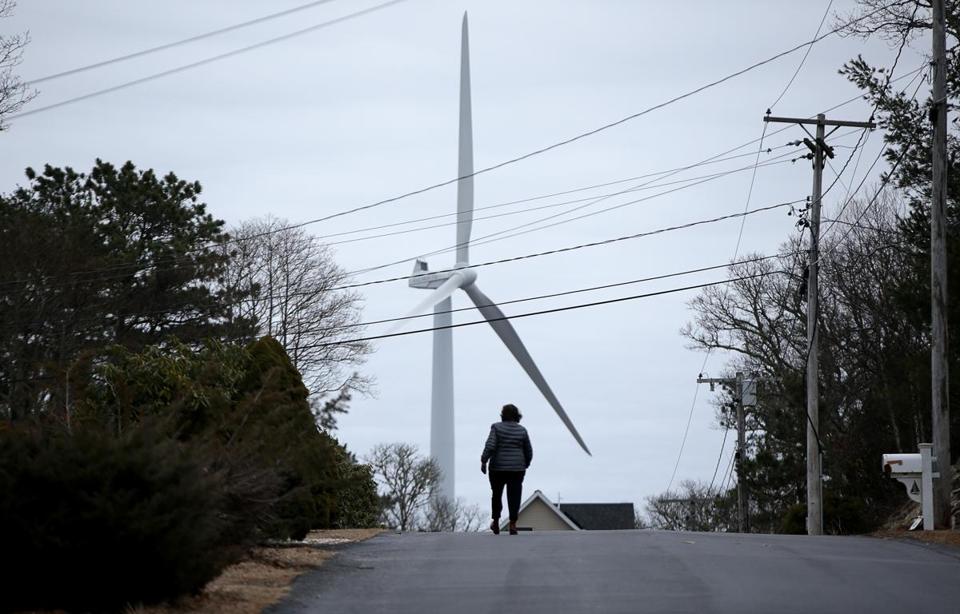 Facing fierce neighborhood opposition and multiple lawsuits, selectmen last week voted to remove the turbines, which had cost the town about $10 million to build, saddling residents with years of debt.

“The town was warned,” he said. “The damage can never be reversed for many of us wind turbine victims. Some of my friends have serious health issues now.”

Neighbors complained that the churning of the turbines and the resulting flickering light and vibrations produced dizziness, nausea, depression, or anxiety — a set of symptoms that critics call “wind turbine syndrome.”

In 2012, with both 1.65-megawatt turbines operating and the opposition becoming increasingly vocal, state environmental officials took the unprecedented action of recommending that one be shut down. They found that turbine, which was fewer than 1,500 feet from the nearest home, had repeatedly exceeded allowable noise levels.

They sell you a dream of wind turbines lasting 25 years and they really last 12. And make you pay and pay and pay for them. What a con.

The analysis of almost 3,000 onshore wind turbines — the biggest study of its kind —warns that they will continue to generate electricity effectively for just 12 to 15 years.
The wind energy industry and the Government base all their calculations on turbines enjoying a lifespan of 20 to 25 years.

The study estimates that routine wear and tear will more than double the cost of electricity being produced by wind farms in the next decade.
Older turbines will need to be replaced more quickly than the industry estimates while many more will need to be built onshore if the Government is to meet renewable energy targets by 2020.

The extra cost is likely to be passed on to households, which already pay about £1 billion a year in a consumer subsidy that is added to electricity bills. Wind Turbines in Ontario come with a license to kill bats.

Ontario’s Ministry of Natural Resources has set 10 bat deaths per turbine as the threshold at which the mortalities are considered significant and warrant action.

And that number is being exceeded.

Bats are being killed in Ontario at the rate of 18.5 per turbine, resulting in an estimated 42,656 bat fatalities in Ontario between May 1 and October 31, 2015, according to the report released by Bird Studies Canada, a bird conservation organization.

Imagine what would happen if the oil industry was allowed to kill 10 bats or birds per oil well.

Imagine the screaming from “environmentalists”.

Birds are being killed too.

Don’t get in the way of crony capitalists making huge subsidies.

The Obama administration is revising a federal rule that allows wind-energy companies to operate high-speed turbines for up to 30 years, even if means killing or injuring thousands of federally protected bald and golden eagles.

Under the plan announced Wednesday, companies could kill or injure up to 4,200 bald eagles a year without penalty — nearly four times the current limit. Golden eagles could only be killed if companies take steps to minimize the losses, for instance, by retrofitting power poles to reduce the risk of electrocution.

Because of the boom of renewable energy, more and more wind turbines have to be switched off. The reason is power overloading. The network operators must turn down electricity generated from windmills when their power threatens to clog the network. Originally, this was intended only as an emergency measure. The operators of wind and solar parks, however, are being subsidised for electricity that is not produced.

For the grid operator Tennet alone, these costs added EUR 329 million in 2015 – two and a half times as much as in the previous year. The other network operators 50Hertz, Amprion and EnBW had a combined cost of 150 million euros, according to a survey of Wirtschaftswoche among the four network operators in Germany.

‘Subsidy Sam’ was written by Lyndsey Ward to counter the shameless pro-wind propaganda allowed in schools.

Acoustic pollution harms humans on land and whales in the ocean.

“Between January 9 and February 4 this year, 29 sperm whales got stranded and died on English, German and Dutch beaches. Environmentalists and the news media offered multiple explanations – except the most obvious and likely one: offshore wind farms.

Indeed, that area has the world’s biggest concentration of offshore wind turbines, and there is ample evidence that their acoustic pollution can interfere with whale communication and navigation.”

“researchers at the University of St. Andrews have found that the noise made by offshore wind farms can interfere with a whale’s sonar, and can in tragic cases see them driven onto beaches where they often die,” a UK Daily Mail article observed.

It is certainly possible that permanent damage to the cetaceans’ middle and inner ears, and thus to their built-in sonar, can result from large air guns used during seismic surveys and from violent bursts of noise associated with pilings being rammed into the rock bed. Wind promoters themselves admit that their pile-driving can be heard up to 50 miles (80 kilometers) underwater, and can be harmful to whales that happen to be nearby. But unless these injuries cause external bleeding, they are very difficult to detect.”

“Unfortunately, Grohnde is scheduled to close in 2021, decades ahead of its useful life, like all of Germany’s nuclear plants, and the positive and negative affects of that policy are still being debated.

In 2001, Gerhard Schröder’s government decided to get rid of nuclear power from the country as fast as possible. In 2010, Merkel actually decided to extend the lives of nuclear power plants another ten years beyond Schröder’s limit. But the Fukushima disaster in 2011 forced her politically to revert back to the original plan, closing eight nuclear plants immediately and planning to close the rest in the following 10 years.”

German power companies have been forced to set aside 39 billion Euros for the nuke decommissioning.

And most likely Germany will still be burning huge amounts of brown coal long after the last nuke is shutdown.