This paper is a pdf.

Biofules, biomass , wood pellets et al are a disaster if you believe more CO2 will cause Global Warming.

In sum, although bioenergy from wood can lower long-run CO2 concentrations compared to
fossil fuels, its first impact is an increase in CO2, worsening global warming over the critical
period through 2100 even if the wood offsets coal, the most carbon-intensive fossil fuel.
Declaring that biofuels are carbon neutral as the EU and others have done, erroneously
assumes forest regrowth quickly and fully offsets the emissions from biofuel production and
combustion. The neutrality assumption is not valid because it ignores the transient, but
decades to centuries long, increase in CO2 caused by biofuels. 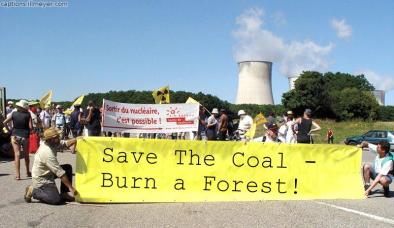 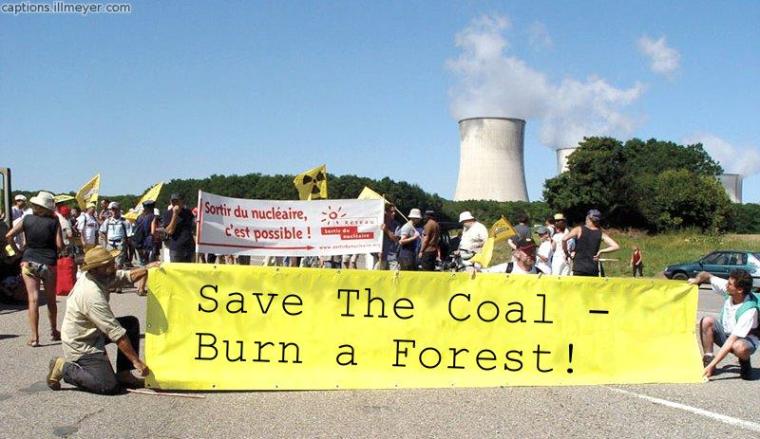 The evil EU morons are still encouraging DRAX to burn whole forests instead of coal. The farce continues:

Management at Drax received an early Christmas present yesterday when the European Commission announced that it had approved the company’s bid to convert a third coal-fired power plant unit to biomass.
The UK’s largest coal-fired power producer had been anxiously awaiting the Commission’s state aid decision, as it attempts to re-position itself ahead of the country’s ultimate coal power phase out.
The Commission has opened an investigation into government support for the project in January and concluded that it was in line with the European Union’s environmental and energy targets.

Interesting paper coming out that may demolish Psychology.  And other pseudo sciences like climate science.

“How could hundreds of peer-reviewed studies possibly be so wrong? There may be a way to explain it, and it’s shaking researchers to their cores.

Every time scientists conduct an experiment, there’s a chance they’ll find a false positive. But here’s the scary thing: Psychologists are now realizing their institutions are structured so it’s more likely that false positives will make it through to publication than inconclusive results.

“We’re now learning that there’s so much bias in the published literature that the meta-analyses can’t be trusted,” Simine Vazire, a professor of psychology and the editor in chief of the journal Social Psychological and Personality Science, tells me.”

I’ve written about DRAX before. Because of loopholes in UK and EU “climate” laws the largest coal power plant is switching from coal to wood pellets sources from the USA.

DRAX has made the news again.

The report says it has found ‘misleading statements by Enviva about its emissions and environmental impacts’ in its prospectus when it was floated on the New York stock exchange last April.

The report says Enviva has claimed that ‘burning wood in power plants reduces carbon emissions compared to coal’. But the study says Drax’s own data shows that while burning coal leads to emissions of 1,901lb of carbon dioxide per megawatt hour (Mwh), the figure for wood is significantly higher – 2,128lb per Mwh.

Enviva’s claim is only possible because of a UK and EU ‘policy loophole’ – which does not apply in America – classing biomass fuel such as wood pellets as ‘zero carbon’.

According to the study, Enviva has not made this clear. Its claim to the SEC that using its pellets ‘reduces’ emissions only applies to making and shipping the pellets, not burning them.

The complaint calls on the SEC to launch an investigation to ‘establish and enforce clear guidelines applicable to companies that may be claiming climate benefits’.

Drax produces eight per cent of the UK’s electricity – enough to power six million homes. Half of its six 650 megawatt (MW) generators have been converted from coal to burn wood pellets from America. Drax spokesman Andrew Brown yesterday confirmed the firm wants to adapt its remaining three furnaces.

This really isn’t funny at all.

But the greenies like to blame everything on coal. In fact in many countries the major sources of Particulate Matter are in fact dust, agricultural and fires.

But coal is always blamed. The biggest man made source of PM many times is diesel soot. And diesel cars are 50-70% of cars sold in Europe.

Back to the Daily Mail article:

“One sufferer said she felt like she had ‘a baby elephant sitting on my chest’, while another said her lungs felt like they had ‘cobwebs’ inside them.

Even those without health difficulties have been told by experts to reduce outdoor exercise, with air pollution set to hit 10 out of 10 in some areas.”

I have mapped the February 2014 mean temperature anomalies in the Environment Canada monthly summaries that have “normals”. The anomalies are calculated from selected stations based on the 1971-2000 average.

The size if the dot represents the size of the anomaly. The 5C black dot in the top left hand corner represents 5C difference from “normal”. Red dots are warmer than normal. Blue are cooler. And Green are 0.

Most of the prairies averaged 5C or more below “normal”. Click for bigger. 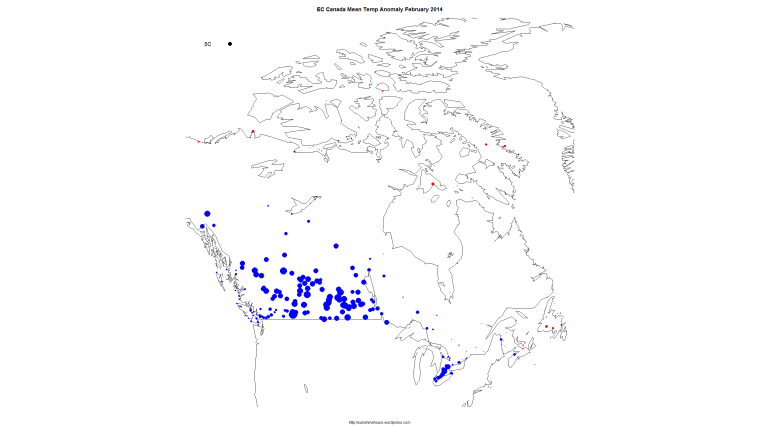 I have mapped the January 2014 anomalies in the Environment Canada monthly summaries that have “normals”. The anomalies are calculated from selected stations based on the 1971-2000 average.

The size if the dot represents the size of the anomaly. The 5C black dot in the top left hand corner represents 5C difference from “normal”. Red dots are warmer than normal. Blue are cooler. And Green are 0.

Not much sign of the Polar Vortex in BC and Alberta for January. A big change from December. 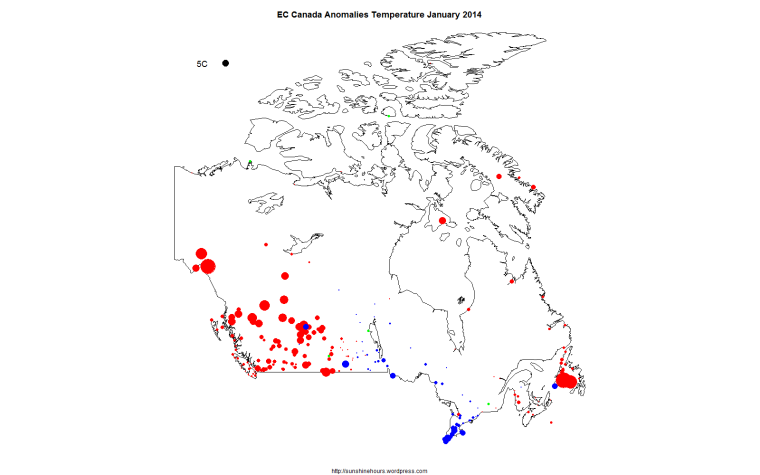 Yesterday I mapped the anomalies for 2013 using the Environment Canada monthly summaries that have “normals”. The anomalies are calculated from selected stations based on the 1971-2000 average.

Click for a bigger version. (The black dot in the top left corner represents a 5C difference. Red = hotter than 1971-2000. Blue = colder.